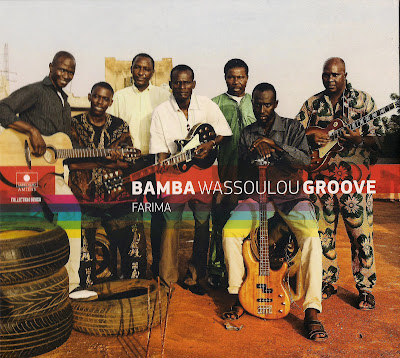 ARTIST: Bamba Wassoulou Groove
TITLE: Farima
LABEL: Label Bleu
Super Djata Band was one of the great Malian combos of the 70s and 80s: their funky, hard-rocking sound, driven by brilliant lead guitarist Zani Diabate, gave first-world listeners accustomed to classic Mande artists like Salif Keita a totally different perspective on the country’s music. Now comes Bamba Wassoulou Groove (BWG), a new group led by veteran Super Djata percussionist Bamba Dembele. They’re not quite a Super Djata tribute band: at least five of the songs here are covers (2, 4, 6, 7 and 10, and maybe more for all I know) but the arrangements are a bit different. BWG sports a triple-guitar lineup, and just as in Congolese music each one stays in its lane: the acoustic strictly has a rhythm function, the lead solos pretty much continuously, and the third guitar (the Congolese call it “mi-solo”) fills in the spaces between the two. It’s as though the three guitars are one giant, amplified kora. The result is a lilting, hypnotic sound that works perfectly with the propulsive Wassoulou rhythms featured in most of BWG’s songs. Beautiful music of special interest to guitar lovers, but also for anyone who appreciates unlikely intersections between tradition and today.
TOP TRACKS:    1    2    5    6    9
ALSO RECOMMENDED:    3    4    7    8    10    11
Labels: Reviews