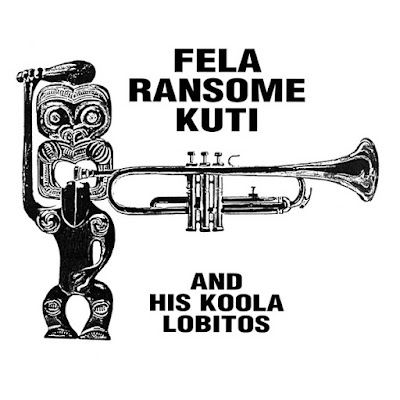 ARTIST: Fela Ransome Kuti & His Koola Lobitos
TITLE: Highlife-Jazz & Afro-Soul (1963-69)
LABEL: Knitting Factory
Before he was radicalized, converted to the church of James Brown and ended up inventing Afrobeat, Fela Kuti played jazz and highlife. The early years of Fela’s Nigerian music career are documented in this fascinating three-disc set. Back then, Fela played trumpet (he switched to sax in 1973); his jazz quintet (disc 1-tracks 7 and 8) sounds like they’re auditioning for Blue Note Records, with Fela’s solos in a Kenny Dorham bag. The idea behind Fela’s highlife band Koola Lobitos was to add modern jazz to highlife – check out 1-3 for the best illustration of their early sound. Koola Lobitos’ 1965 debut album is included here in its entirely; it’s the source of two now-classic late highlife tracks that have been frequently anthologized (the swinging 2-2 and the moody, proto-Afrobeat 2-5), and of 2-11 which is equally outstanding. There are six sides of Koola Lobitos live, which is a treat despite the rough audio quality; 3-4 is my favorite. And by the time of 3-9 (somewhere between ’66 and ’68), Fela had come pretty close to the sound that would make him famous. Liner notes by Fela’s biographer Michael Veal do a great job of contextualizing these recordings.
TOP TRACKS: Disc 1-Track 3    1-7    2-2    2-5    2-11    3-4    3-9
ALSO RECOMMENDED: Many of the rest of them
Labels: Reviews