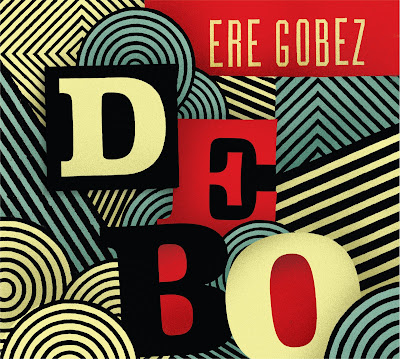 ARTIST: Debo Band
TITLE: Ere Gobez
LABEL: FPE
The ten year old Boston-based Debo Band is back with their third recording of Ethiopian-influenced music, and they’re rocking harder than ever. Their 2010 debut EP documented an Ethio-revival act; they’ve gradually grown into a band that emphasizes original compositions and unusual findings, played with a harder, grittier sound than anything you’ll hear on the Ethiopiques reissues that inspired them. What they’re creating now is more like Ethio-rock, related to the Budos Band’s current sound or The Ex’s collaborations with Getatchew Mekurya. Debo is even bigger than either of those groupings, and they can get smeared and muddy at times with all the instruments crowding into the low midrange. But the excitement they bring to Ethiopian songs is unrivaled: try track 4 with its hard-rock intro, punk-rock tempo, and outstanding singer Bruck Tesfaye’s leather-lunged bellowing. I think the best material here is the originals: 1 in the Gurage style, 6 influenced by Mekurya’s shellela warrior music, and 10 inspired by the Golden Age sound of Tilahun Gessesse. This is one of the most imaginative, exciting world music projects in the USA today.
TOP TRACKS:    1    4    6    10
ALSO RECOMMENDED:    2    3    7    9    11
Labels: Reviews