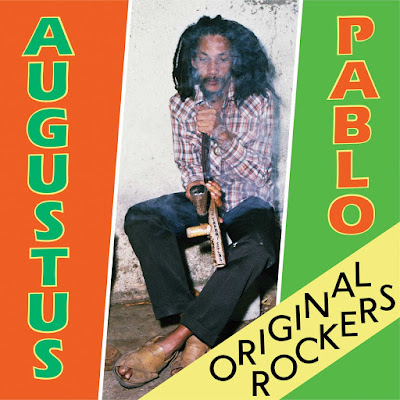 ARTIST: Augustus Pablo
TITLE: Original Rockers
LABEL: Greensleeves
If you’re making a short list of the best dub albums of all time, Original Rockers has to be near the top. It’s a collection of 10 sides (the first 10 tracks here) produced by Augustus Pablo and mixed by King Tubby between 1972 and 1975; the compilation was released in 1979 and was later augmented with 13 additional versions, outtakes and so forth. Pablo’s main instrument was melodica, a free-reed controlled by a piano-like keyboard. Pablo’s haunting, spacious sound, Tubby’s innovative analog manipulations, and the best rhythm section in Kingston (basically Lee “Scratch” Perry’s Upsetters, which would later become the Wailers Band) are the elements needed for a truly mind-expanding listening experience. Start with the classic track 2, then just play the original album’s entire B side (tracks 6-10), starting with a great Dillinger toast (6) and a trippy version of “Ain’t No Sunshine” (7). My favorites among the added tracks are Big Youth’s deejaying on 14, 15 which was supposed to be one of the original ten but Pablo sent the wrong tape, and Bongo Pat’s conscious lyrics on 22. Definitely life-enhancing material here.
TOP TRACKS:    2    6    7    8    9    10    14    15    22
ALSO RECOMMENDED: most of the rest of them
Labels: Reviews