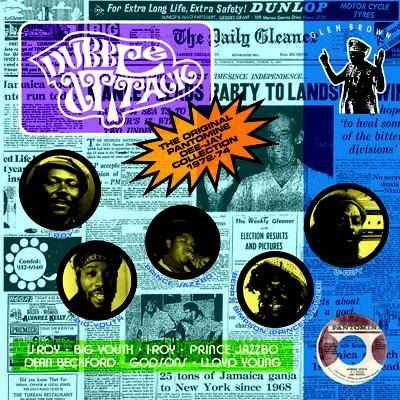 ARTIST: various artists
TITLE: Dubble Attack: The Original Pantomine Dee-Jay Collection 1972-74
LABEL: Greensleeves
Glen Brown is one of the unsung heroes who made reggae great. A singer who doubled on guitar and melodica, Brown made his mark as a producer of a series of small-pressing singles featuring some of the best musicians in 1970s Jamaica. The tracks he cut at his periodic (as time and money were available) sessions would frequently perform quadruple duty: as instrumental riddims, as beds for singers and toasting deejays, and as fodder for remixed dub platters. This set, originally compiled in 1989 and now reissued, captures some of Brown’s best deejay tracks. (There are companion volumes of singers and instrumentals.) Brown worked with some of the best-known deejays around: U-Roy, Big Youth, I-Roy; but the best riddims here are behind some lesser knows. Prince Jazzbo hits it out of the park on 9, which percolates like the best rocksteady; 5 with Dean Beckford is nearly as good. 11 features a slightly off-color toast by Prince Hammer plus Brown’s own melodica playing; 6 has more melodica and a minimalist Augustus Pablo kind of sound; and 14 is a sharp version of Clancy Eccles’ classic “Rod Of Correction.” This is the real stuff right here.
TOP TRACKS:    5    6    9    11    14
ALSO RECOMMENDED: many of the rest of them
Labels: Reviews