Space Echo: The Mystery Behind The Cosmic Sound Of Cabo Verde Revealed 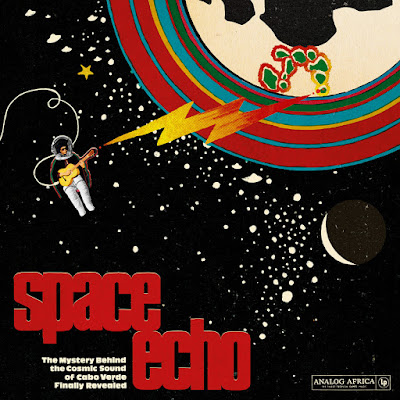 ARTIST: various artists
TITLE: Space Echo: The Mystery Behind The Cosmic Sound Of Cabo Verde Finally Revealed
LABEL: Analog Africa
The archipelago nation of Cabo Verde is best known musically for the mournful morna of Cesaria Evora, but don’t sleep on its more danceable funana and coladeira styles. The latest release from Analog Africa digs deep into what happened in the 70s and 80s when funana and coladeira met psych, funk and disco. A seminal event, believe it or not, was a 1968 shipwreck that deposited a cargo ship loaded with synthesizers and electronic keyboards on the shores of largely unelectrified Sao Nicolau island. As a result, schools all over the country were supplied with synthesizers and a generation of young musicians grew up playing them, most famously Paulino Vieria, whose band Voz De Cabo Verde plays on half these tracks. Analog Africa’s Samy Ben Redjeb has sequenced these tracks like a DJ – the set starts slowly and builds up to a series of climaxes, culminating for me in track 14, which is the best kompas music you’ll hear outside of Haiti (coladeira is heavily influenced by Haitian music). Too many great songs here for me to describe – just play ‘em all. Brilliant.
TOP TRACKS:    6    7    8    9    10    11    13    14    15
ALSO RECOMMENDED:    2    3    5    12
Labels: Reviews