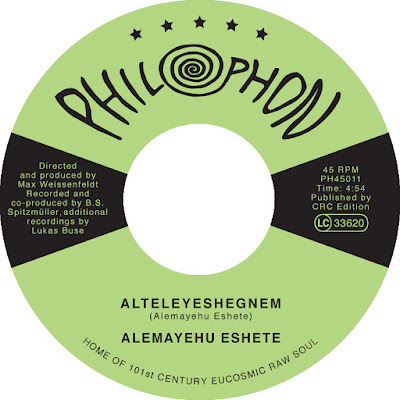 ARTIST: Alemayehu Eshete
TITLE: “Alteleyeshegnem” / “Temar Ledje”
LABEL: Philophon
Worldwide appreciation of the brilliant music made in Ethiopia in the 1960s and 70s got its first traction in 1997 from Francis Falceto’s Ethiopiques reissue series. The latest phase is career revivals for some of the music’s central figures: Mulatu Astatke, Hailu Mergia and Girma Beyene have all made recent recordings and concert appearances with a younger generation of non-Ethiopian musician-fans. Now it’s Alemayehu Eshete’s turn – he’s the so-called “James Brown of Ethiopia” whose soulful singing and energetic stage performance has made him an all-time favorite in Ethiopia and its diaspora. Here he’s backed up by a band led by German drummer-producer Max Weissenfeldt who’s worked in recent years with Dr. John, Lana Del Rey, Idris Ackamoor & The Pyramids, the aforementioned Haliu Mergia and his own band The Polyversal Souls. The arrangements here are just superb: side A cooks and side B simmers, both will surprise you at every turn. This elicits a top-tier vocal performance from Eshete, who does not sound his age of 76. Two songs just aren’t enough – how about a full-length, gentlemen?
TOP TRACKS:    1    2
Labels: Reviews