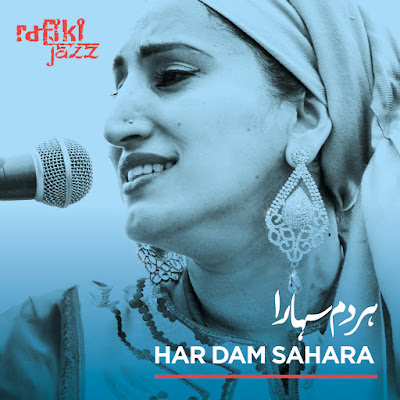 ARTIST: Rafiki Jazz
TITLE: Har Dam Sahara
LABEL: Riverboat
Rafiki Jazz is an octet from Sheffield, England with a decidedly global outlook: members hail from six countries on four continents. You won’t find a lot of bands that feature oud, kora, steelpan, tabla and berimbau. The trick, of course, is preventing the multicultural elements from turning into a kind of Euro-sausage, a generic “world music.” This problem, I’m happy to report, is entirely absent from this excellent recording, the band’s third album. At heart Rafiki is a folk group, drawing sources and inspiration from the various cultural traditions of its players: 2 is a cover of a song by Gambian neo-traditional band Ifang Bondi, 3 is an arrangement of three Coptic (Egyptian Orthodox) songs, 5 reinterprets a Sufi ghazal made famous in a Bollywood film, and 6 is an ingenious re-reading of Nusrat Fatah Ali Khan’s qawwali classic “Mustt Mustt.” All these influences are handled with insight, grace and uncommon musical interplay between the bandmates, who clearly enjoy playing together. Most of the album was recorded live in the studio, and it has a warm, natural sound that perfectly complements the material and the players. A superb album.
TOP TRACKS:    2    3    5    6
ALSO RECOMMENDED:    1    4    7
Labels: Reviews