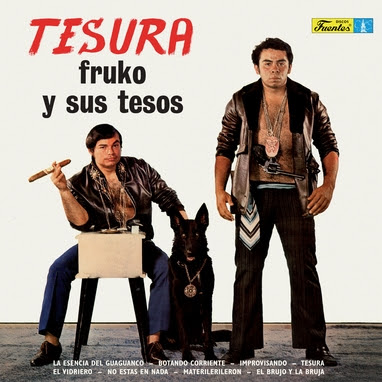 ARTIST: Fruko Y Sus Tesos
TITLE: Tesura
LABEL: Vampisoul
It may seem unlikely today, but there was a time when salsa was the punk rock or the gangsta rap of the Latin music world. In New York, Willie Colon and Hector Lavoe were striking thug-life poses on albums like The Hustler (1968) and Cosa Nuestra (1970). Fruko Y Sus Tesos (Fruko & His Tough Guys) used the same approach in Colombia – just check out the cover of this disc, their 1970 debut. Musically, they were on the same wavelength as Willie & Hector as well: propulsive tempos, trombone-led arrangements, relatively simple charts, definitely more dance music than jazz. Their songwriting wasn’t very developed yet: there are a number of descargas (jam sessions) here, the best of which is track 1. And the other top tracks are covers or near-covers: 7 was a current hit for Johnny Pacheco and Pete (El Conde) Rodriguez and 2 is closely modeled on Louie Ramirez’s “Botando Candela.” By album two (A La Memoria Del Muerto, also recently reissued by Vampisoul) the writing is kicking in, they’ve upgraded the sonero position and they’re ready to become stars. Here you get to hear them in development.
TOP TRACKS:    1    2    7
ALSO RECOMMENDED:    3    4    5    6    8
Labels: Reviews