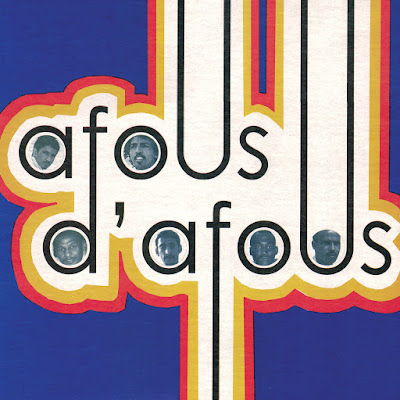 ARTIST: Afous D’Afous
TITLE: Tenere
LABEL: Sahelsound
Most of the Saharan desert blues I get to hear is produced with a first-world audience in mind. This makes sense: the market for assouf music in Europe and the USA is now large and rich relative to the local one, so bands focus on breaking onto the international circuit. What I haven’t heard are the hundreds of local acts plying their trade in Mali, Niger, Algeria, Libya and Burkina Faso, flying under the world music industry’s radar. Here’s one of them. Afous D’Afous is from Tamanrasset, Algeria’s Tuareg capital; aside from Tinariwen, they’re probably the most popular exponents of la guitare in their home market. This is their debut album, released locally in 2015 and now to the world. Start with track 4, the song that put these guys on the map in 2010: this new arrangement features stem-winding guitar playing of course, but listen for the synth washes and the dancehall-inspired breakdown midway through. Then try 1, which is even better, probably my favorite song in this genre all year. Keep listening for sitar and tabla from India, and for more Jamaican influence. Sounds like the first-world audience may only be hearing the tip of the iceberg so far.
TOP TRACKS:    1    3    4
ALSO RECOMMENDED:    2    5    6    7    8    9
Labels: Reviews