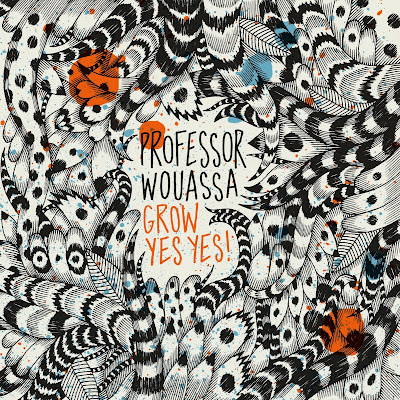 ARTIST: Professor Wouassa
TITLE: Grow Yes Yes!
LABEL: Matasuna
An American or European Afrobeat band today is working in a crowded space: the genre has become so popular you need a gimmick or special talent to stand out from the crowd. Professor Wouassa, from Lausanne Switzerland, has the latter in spades. Currently lining up with eleven members, they’ve been together since 2003. This is their second album, recorded in 2013, self-released in 2015 and now picked up for vinyl release (in a beautiful package) by the new Matasuna label. Most of the players have jazz backgrounds and it shows: they’re rhythmically in-the-pocket at all times, the horn arrangements are some of the most imaginative I’ve heard in this genre, and they handle complex passages such as the breakdown in the last three minutes of track 5 (essentially a live dub mix) like they’re routine. This is not a band that has to play fast to get you excited: they’re at their best at vintage Afrobeat tempos as on the outstanding 2, if you want something faster try 9 or especially 4. Another good sign: the longest tracks (5 and 7, the latter featuring Seun Kuti) are among the best. Top-shelf Afrobeat, competitive with the world’s best.
TOP TRACKS:    2    3    4    5    7    9
ALSO RECOMMENDED:    1    6    8
Labels: Reviews