Meklit | When The People Move The Music Moves Too 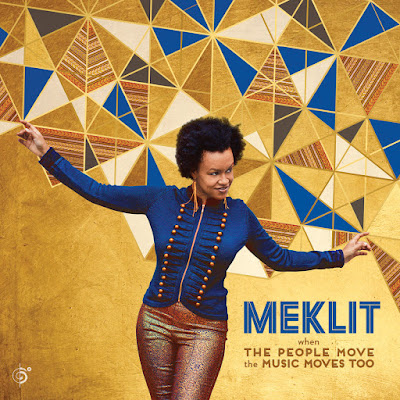 ARTIST: Meklit
TITLE: When The People Move The Music Moves Too
LABEL: Six Degrees
You can’t pin Meklit Hadero down. Born in Ethiopia, educated at Yale, living in Oakland, she lectures around the world as a TED Senior Fellow and she co-founded The Nile Project. This is her fourth album as a singer-songwriter; it’s the one I’ve been waiting for her to make. Meklit has shown off her jazz chops, she sings soul with the best of them, and she has the introspective indie-folk thing down pat. On her previous records, she’s kept her Ethiopian heritage bubbling below the surface – here it leaps off the recording as on track 2, an artist’s mission statement in song. And Meklit resolutely follows that mission the rest of the way; the result is pop music with an Ethiopian core, the same way that Paul Simon’s Graceland is South African and The Rhythm Of The Saints is Brazilian at core. My favorites here are some of the most explicitly Ethiopian tracks: 3 is 21st-century Ethio-jazz with propulsive double drumming and a great sax solo, 4 is based on the eskista “dancing shoulders” rhythm, and 9 is azmari minstrel music turned into pop song. But every track on this ambitious, brave, multi-faceted and ultimately triumphant album is worth hearing and thinking about.
TOP TRACKS:    2    3    4    9
ALSO RECOMMENDED:    1    5    6    7    8    10    11
Labels: Reviews