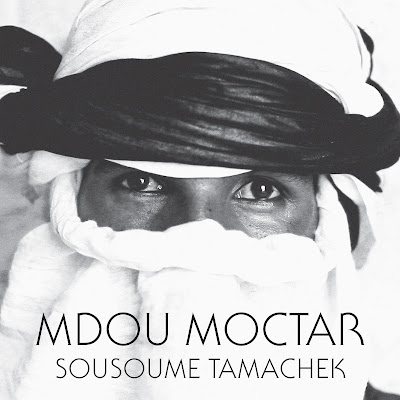 ARTIST: Mdou Moctar
TITLE: Sousoume Tamachek
LABEL: Sahelsounds
Mdou Moctar from Niger is a central figure in the current Tuareg guitar music boom. He’s best known as the star of the first Tamasheq-language film, Rain The Color Blue With A Little Red In It (yes, it’s modeled after the Prince movie; no, there is no word for “purple” in Tamasheq). The movie features several high energy performances where Moctar shreds in the currently popular manner, not unlike his Nigerien peer Bombino. But his roots are in quieter, more informal, unplugged situations he calls takits (picnics) – sitting under a tree with friends (the film depicts these as well). This album presents Moctar in takit mode – it’s billed as “music for desert picnics.” He’s playing all the parts via multitracking: playing lead and rhythm guitar, singing call and response vocals, even adding calabash percussion. It reminds me of the unplugged Tinariwen of The Radio Tisdas Sessions and Tassili, without the latter’s celebrity guest stars. This is the music you’d imagine being played around the campfire at night. Beautiful music that rewards close listening.
TOP TRACKS:    2    3    5
ALSO RECOMMENDED:    1    4    6    7    8
Labels: Reviews