Sweet As Broken Dates: Lost Somali Tapes From The Horn Of Africa 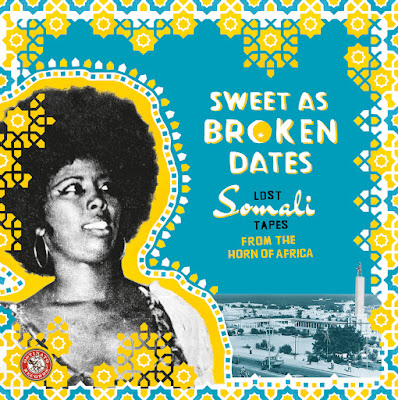 ARTIST: various artists
TITLE: Sweet As Broken Dates: Lost Somali Tapes From The Horn Of Africa
LABEL: Ostinato
Like most African nations, Somalia had a cultural golden age after it gained independence, which was in 1960. The musical fruits of this era have literally been underground: Radio Hargeisa’s tapes were cleverly buried before that city was leveled by air strikes in the 1988 civil war. The Redsea Cultural Foundation owns the largest collection of recovered Somalian tapes, 10,000 items strong; Ostinato has digitized about a third of them and this release is their first effort to bring Somali music to the world’s attention. Calling the music a revelation is probably underselling it: the sounds here, recorded mostly in the 70s and 80s, certainly rival those of neighboring Ethiopia. The Rainbow Empire is naturally a major influence on the Somali sound – check track 12 for an example. Sudan and Egypt are even more audibly prominent, and connections stream in from across the globe since Somalia has long been a key Indian Ocean trading site: listen closely and you’ll hear flavors of India, Iran, China and Southeast Asia. And of course there was no escaping American rock, soul and funk. For sheer ear-opening possibility, I haven’t heard a better compilation all year.
TOP TRACKS:    1    4    5    6    7    8    11    12    13    15
ALSO RECOMMENDED: all of the rest of them
Labels: Reviews