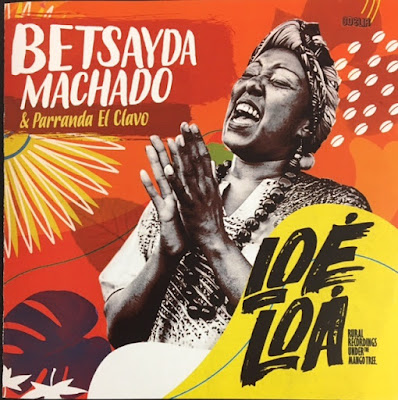 ARTIST: Betsayda Machado & La Parranda El Clavo
TITLE: Loe Loa: Rural Recordings Under The Mango Tree
LABEL: Odelia
Parranda is music of the Afro-Venezuelans of the Barlovento region on Venezuela’s Caribbean coast, many of whom are descended from the escaped rebel slaves who founded cumbes (fortified towns) starting in the sixteenth century and remained at war with the Spanish colonialists until 1820. Venezuelan parranda (the same word is used in Puerto Rico and among the Garifuna people for music that’s related but not identical) is based on drums and voices – a Christmas celebration might have 100 players and singers, this recording has eight. La Parranda El Clavo, fronted by powerhouse female singer Betsayda Machado, have played in the town of El Clavo for 30 years – now their dramatic and exhilarating music is being introduced to the world via this debut album and an international tour. (They’ll be at the Richmond Folk Festival in October.) The singers belt it out at the top of their lungs and the drummers, playing instruments made from the town’s lano (kapok) trees, play just as hard – this is unamplified music that makes your body vibrate. This album is a window on a fascinating, compelling musical tradition that’s entirely new to me.
TOP TRACKS:    1    2    3    7    8
ALSO RECOMMENDED:    4    5    6    9
Labels: Reviews