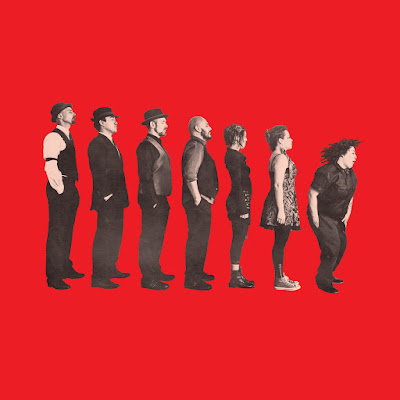 ARTIST: La Misa Negra
TITLE: La Misa Negra
LABEL: NAM Entertainment
Cumbia is probably more popular today than it’s ever been, and that’s saying something since it’s been around for nearly 200 years. La Misa Negra, an 8-piece band from Oakland CA, is inspired by Colombian big band porro from the 1950s and 60s. But they put their own spin on it: leader Marco Polo Santiago is a metal-head (tracks 1 and 10 are covers of Black Sabbath and Alice In Chains) who took up accordion to play this music – he describes the band as “cumbia on crack.” Their unheralded 2013 debut album was one of my favorites that year; this one, co-produced by Juan Manuel Caipo (Bang Data, Quiero Creedence) is even better. On tracks like 4, they’re getting deeper into Afro-Latin rhythms – 7 could almost be Cuban rumba, 9 is an actual Cuban cover. 3 is a kind of speed-cumbia played almost twice as fast as the classics for your pogoing pleasure. 2 and 11 are more like the classics – the former is anchored by Santiago’s accordion, the latter by Justin Chin’s baritone sax. And lead singer Diana Trujillo has a foghorn of a voice, cutting through the densest arrangement. This is one of the best American bands that nobody knows yet – not for long, I imagine.
TOP TRACKS:    2    3    4    7    9    11    12
ALSO RECOMMENDED:    1    5    6    8    13
Labels: Reviews