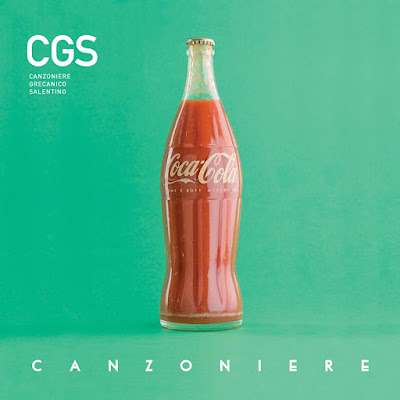 ARTIST: Canzoniere Grecanico Salentino
TITLE: Canzoniere
LABEL: Ponderosa
Canzoniere Grecanico Salentino (CGS), from Lecce in the Salentine Peninsula, is Italy’s leading traditional music ensemble. In their 42nd year, on the 19th album, they’re doing something different: recording songs that are equally inspired by the southern Italian pizzica tradition and by Western pop. This is the kind of album that, had it been recorded in 1967, would have been called “folk-rock,” the Italian analogue of Fairport Convention or the Byrds. Southern Italian music is highly rhythmic, almost African sounding, so maybe a better term in 2017 would be “folk-EDM” – tracks like 3, 9 and 12 don’t even need to be remixed. The pop influence comes through most clearly in the big hooks of songs like 1, 2 and 3. For a folkier approach, try 7 (the only traditional number here) and 8 (an original deep in pizzica’s trance-inducing swirl). If you’ve seen CGS perform (they highlighted the 2016 Richmond Folk Festival), you already know that they’re one of the most exciting live acts in the world today. This brilliant, accessible album fully captures the band’s dynamism and is just what’s needed to get southern Italian music to cross over to a wider audience.
TOP TRACKS:    1    2    3    7    8    9    12
ALSO RECOMMENDED:    4    6    10    11
Labels: Reviews