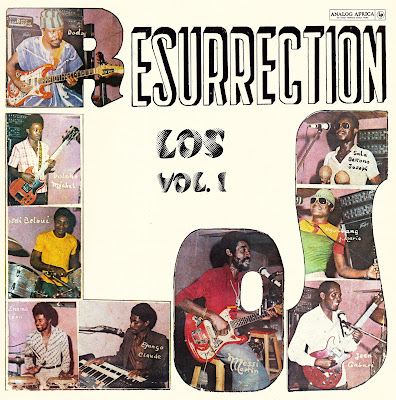 ARTIST: Los Camaroes
TITLE: Resurrection Los
LABEL: Analog Africa
With all the recent years’ crate-digging activity, one might think that he’d heard all the great African records of the 60s, 70s and 80s. One would be incorrect, as here’s a sensational album from a Cameroonian band I’d never even heard of. Los Camaroes were apparently a popular combo that broke up in the late 70s then regrouped to record this last album in 1979, live at the Mango Bar in Yaounde. Their sound is driven by the interplay between guitarists Jean Gabari (the bandleader) and Messi Martin. As in Congolese soukous, these guitarists sound like they’re soloing independently but their lines interact and overlap to provide a full harmonic structure for each song. (In the world of rock music, Television’s Tom Verlaine and Richard Lloyd used a similar strategy.) Start with track 1, the most minimal arrangement here, which allows the listener to focus in on the guitar lines. The go right to 2, a masterpiece of Central African guitar music with the funky bass line that’s the definition of Cameroonian makossa. Los Camaroes were whizzes at bikutsi, the other popular style of the day, as evidenced by 5. I’m ready for reissues of everything this band ever did.
TOP TRACKS:    1    2    4    5    6
ALSO RECOMMENDED:    3
Labels: Reviews