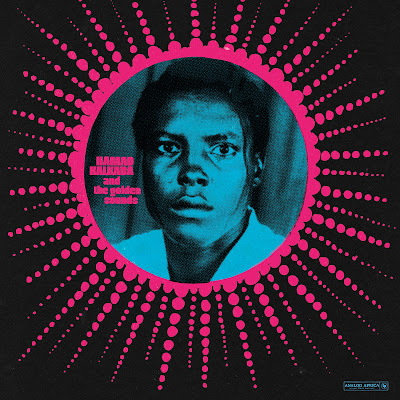 ARTIST: Hamad Kalkaba & The Golden Sounds
TITLE: 1974-1975
LABEL: Analog Africa
This album contains the complete recorded output of Hamad Kalkaba Malboum, who led Cameroon’s Republican Guard Orchestra as a young man and left music to focus on his military career and on athletics. His musical life was all but lost to the sands of time until Analog Africa’s Samy Ben Redjeb stumbled upon a Kalkaba 45. Kalkaba hails from Cameroon’s north, near the border with Chad, and his music puts the local Gandjal rhythm in the modern context of 1970s post-colonial Africa: jazzy big band charts, soulful singers, swinging organ and electric guitar, and of course the ubiquitous influence of American R&B and Fela Kuti’s Afrobeat. Authenticite is the term used across west and central Africa for this era of musical innovation and combination, and Kalkaba’s tiny oeuvre stands up with the best of that place and time. These are six small masterpieces – 40 years on, you’re left with the tang of regret that Kalkaba didn’t follow the path of his peers such as Bembeya Jazz, the Rail Band, Orchestre Poly-Rythmo and the like. But at least we have these six recordings, and they are glorious. This one gets my highest recommendation – don’t miss it.
TOP TRACKS:    1    2    3    4    5    6
ALSO RECOMMENDED: that’s all there is, folks
Labels: Reviews