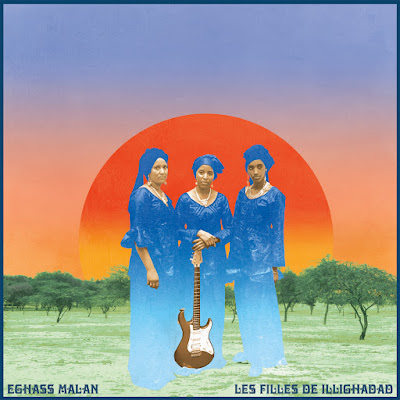 ARTIST: Les Filles De Illighadad
TITLE: Eghass Malan
LABEL: Sahel Sounds
The music we refer to as desert blues and Touregs call la guitare or assouf is a modern construct – it was invented by exiles in Algeria and Libya in the 1970s. It’s based on the traditional style called tinde, which is played in Tamasheq villages almost exclusively by women; yet la guitare has been until now a male-dominated genre. Les Filles De Illighadad are three young women from Niger led by Fatou Seidi Ghali, perhaps the first Toureg female guitarist in her country. Her bandmates accompany her on tinde drum (a goatskin stretched across a mortar) and calabash floating in a bowl of water; all three sing. Les Filles’ approach is gentle and folkloric, similar to Tinariwen’s international debut The Radio Tisdas Sessions and far removed from the guitar-hero raveups of their generational peers Bombino and Oumar Konate. Ghali learned to play by watching her older brother, then taking his guitar when he left the house and sneaking off to copy what she saw. She’s turned herself into a virtuoso of Tuareg fingerstyle on both acoustic and electric guitars. This is another new chapter in the fascinating book of desert blues that’s being written right in front of our eyes.
TOP TRACKS:    2    5    7
ALSO RECOMMENDED:    1    3    4    6
Labels: Reviews