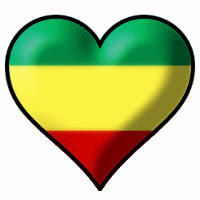 Lovers rock is the flip side of roots reggae: it's romantic rather than dangerous, sunny instead of stormy.  It grew out of Jamaicans' love of American soul music.  They say all soul songs can be broken down into three categories: Beg, Scream and Shout.  Lovers rock is reggae's "Beg" songs.

The genre got its name and some fame in London in the mid 70's (it was tagged after a record label which got its own handle from an obscure Augustus Pablo B-side), but the sound predates the name and continues to be popular today.  Importantly, lovers rock was the avenue by which many female singers were able to break into the male-dominated Jamaican music business.

For Valentine's Day, I'll spin a full hour of some of my favorite lovers rock tracks.  Also this week: the man who got Mali dancing the twist and the Madison, and a set of samba-funk from Brazil.