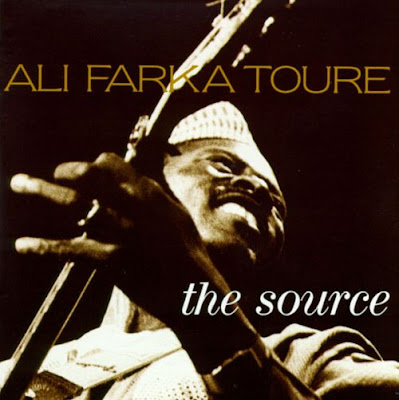 ARTIST: Ali Farka Toure
TITLE: The Source
LABEL: World Circuit
For those of us who were just getting interested in African music around 1990, it’s impossible to overstate the impact of Ali Farka Toure. He sounded entirely different from the Afropop we’d heard: music dug right out of the soil and directly linked to American blues (in fact the influences run in both directions: Toure was listening to John Lee Hooker, Ray Charles and Otis Redding in the 1960s). This is a 25th anniversary remastered reissue of one of his best albums, the first international one to feature his working band Groupe ASCO. The major guest star here is American bluesman Taj Mahal – he and Farka trade acoustic licks on slinky, seductive track 9, recorded backstage before a concert appearance. 4 features Farka’s protégé Afel Bocoum (who’d go on to cut three albums with his band Alkibar) reciting a praise poem to the people of the Malian village Dofana. 6 and 8 are the deep blues – the former slow and sung in the Dogon language (Farka sung in nine different Malian languages during his career), the latter brisk and tuneful. And 1 is one of his finest electric guitar excursions; he doubles on njarka (one-stringed violin) on this one as well. A stone classic.
TOP TRACKS:    1    4    6    8    9
ALSO RECOMMENDED:    2    3    5    7    10
Labels: Reviews