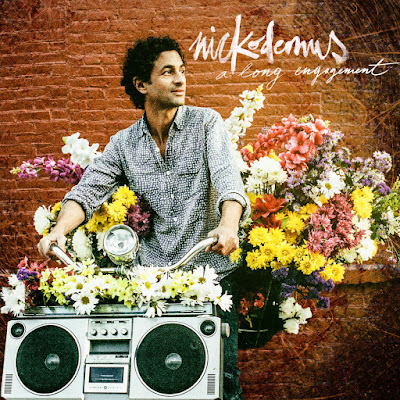 ARTIST: Nickodemus
TITLE: A Long Engagement
LABEL: Wonderwheel
Nick DeSimone, aka Nickodemus, is an NYC-based producer and DJ best known for his Turntables On The Hudson club nights (now in their 20th worldwide season) and for founding Wonderwheel Records. On his fourth solo album, he’s back with another globally-influenced set rooted in the hip hop and house music he grew up with. A Nickodemus production starts with the beat and the drums: no matter how fancy he gets, he always has an ear and a half on the dance floor; his drum sound is always organic and never canned. Track 2 brings back old school rappers The Real Big Show in a sequel to his 2005 hit “Give The Drummer Some.” Guyanese toaster Jahdan Blakkamore is featured on the propulsive 3, while 4 taps into the Moroccan trance sound of Innov Gnawa (featured in last year’s Richmond Folk Festival). The imaginative 5 teams a JB-esque drum beat with a Turkish melody and rap en Espanol by Argentina’s Femina. 9, one of the set’s few instrumentals, is an exotic take on house with violin and saxophone. And 10 is a deep-house star turn for Grey Reverend of the Cinematic Orchestra. This album is just what dance music ought to be.
TOP TRACKS:    2    3    4    5    9    10
ALSO RECOMMENDED:    1    6    7    8    13
Labels: Reviews