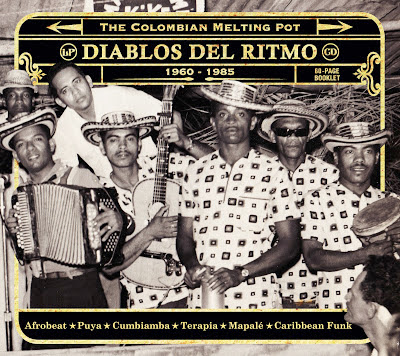 ARTIST: various artists
TITLE: Diablos Del Ritmo: The Colombian Melting Pot 1960-1985
LABEL: Analog Africa
Analog Africa’s Samy Ben Redjeb has been collecting historic Colombian recordings for six years now. This is his second Colombian release, and it’s a great addition to the growing catalog of reissues from that musically diverse and vibrant country. Disc 2 here focuses on cumbia and other tropical and folkloric styles. Most of the disc functions like a third volume follow-up to Will Holland and Soundway’s definitive The Original Sound Of Cumbia, and there are some new directions as well -- carnival music from Barranquilla (track 11), porro orchestra with psychedelic organ (13), and the influence of NYC salsa (3 and 9) for example. Disc 1 follows the trail blazed by Lucas Silva’s Champeta Criolla and Palenque Palenque collections, digging into the incredibly fertile soil of Afro-influenced Colombian music. Along with champeta (tracks 5, 11 and 14) we get Afro-soul (2), Afro-cumbia (13) and killer covers of French Caribbean (1) and Fela Kuti (9) material. The booklet is the icing on the cake -- 60 pages of photos, interviews, authoritative essays and Samy’s personal narrative. Fabulous!
TOP TRACKS: Disc 1: 1    2    5    9    11    13    14    Disc 2: 1    3    9    11    13
ALSO RECOMMENDED: Pretty much all of the rest of them
Labels: Reviews