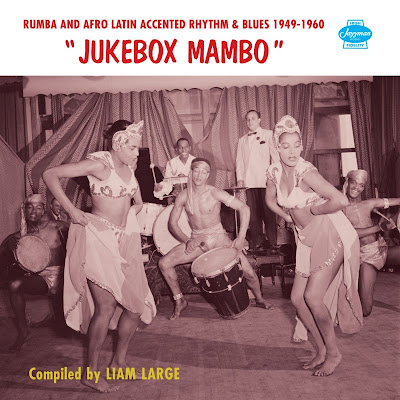 ARTIST:  various artists
TITLE:  Jukebox Mambo: Rumba And Afro Latin Accented Rhythm & Blues 1949-1960
LABEL:  Jazzman
The world music boom that started in Europe and the USA in the 1980s really isn’t anything new; here’s a collection that reminds us a similar phenomenon happened after World War II. Back then, Cuban rhythms were extremely popular and musicians of all kinds figured out ways to incorporate them into their own styles.  Rhythm & blues artists led the way in bringing “the Spanish tinge” (as Jelly Roll Morton had called it in an earlier era) to America’s ballrooms, jukeboxes and charts.  This collection digs deep to find 22 relatively obscure sides; among my favorites are tracks that sounds like a Ray Charles mambo (track 7) and a doo-wop mambo (13), a Latinized cover of “The Honeydripper” (14), maybe the biggest hit produced by Los Angeles’ pachuco movement (12), and a couple of novelty numbers (11 and 19) that must be heard to be believed.  If you’re a fan of Latin music, post-war R&B or the “Blues Before Sunrise” radio program, this collection is for you.  Great concept, very well executed.
TOP TRACKS:    7    11    12    13    14    19
ALSO RECOMMENDED:    most all of the rest of them
Labels: Reviews