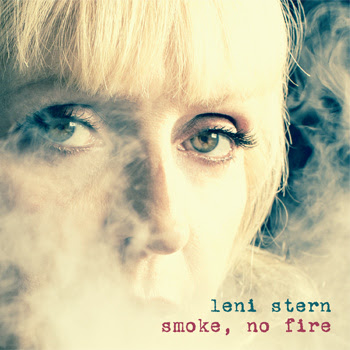 ARTIST: Leni Stern
TITLE: Smoke, No Fire
LABEL: self-released
Leni Stern is back with a dispatch from Mali’s front line. I reviewed Leni’s last record, Sabani, in February; by March she had returned to Bamako and was in the midst of these sessions when the military coup erupted. That experience gives Smoke, No Fire a grittier, edgier feel than its predecessor. The title track (3), one of the best songs I’ve heard all year, is particularly urgent – Leni’s lyrics describe Bamako during the coup, her electric guitar playing stings (it reminds me of Mark Knopfler’s best work), and for the first time she incorporates rap, the CNN of the streets, into her oeuvre. Rapper Woroferele Moden is a revelation here – he returns for a verse on track 8 and he’s front-and-center on 9, a full-fledged West African roots hip-hop track reminiscent of Senegal’s Daara J. Another new development: Leni is now singing confidently in Bambara along with English, and it’s a pleasure to hear her trade verses on 1 with the great Ami Sacko (sounds kind of like Joni Mitchell dueting with Aretha Franklin). Kudos also to kamale ngoni virtuoso Haruna Samake, whose every solo is a show-stopper. Leni Stern is really onto something here.
TOP TRACKS:    1    3    8    9
ALSO RECOMMENDED:    2    4    6
Labels: Reviews