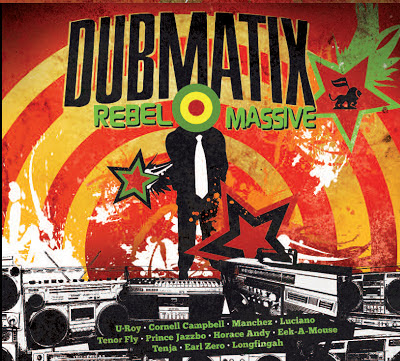 ARTIST: Dubmatix
TITLE: Rebel Massive
LABEL: Echo Beach
More now than ever, Jamaican popular music is a producer’s art. Just as in today’s American pop, R&B and hip hop, the producer is generally responsible for the total sound, the beats, and often all the instruments as well. The songwriter (frequently the producer) contributes raw materials and the singer/rapper is the song’s recognizable face, but the producer is (as they say in the cinema world) the auteur. You can bemoan this trend if you want; more interesting to me is figuring out who excels at this mode of music production – and that’s not necessarily obvious. Based in Toronto, Dubmatix (his given name is Jesse King) is a virtuoso of 21st century Jamaican-style production, combining the classic roots reggae and dancehall sounds with dub treatments, an overlay of electronica, an underpinning of tropical bass and a cool roster of guest voices. For King’s roots sound, try tracks 2 and 9; for dancehall, try 1 and 11. Best of all is 5: this is what dubstep was supposed to sound like (you know, steppers riddim + dub) before it was hijacked by know-nothings. Here’s a pro tip for the JA music industry: hire this guy to produce your next session.
TOP TRACKS:   1    2    5    9    11
ALSO RECOMMENDED:    3    7    8    10
Labels: Reviews