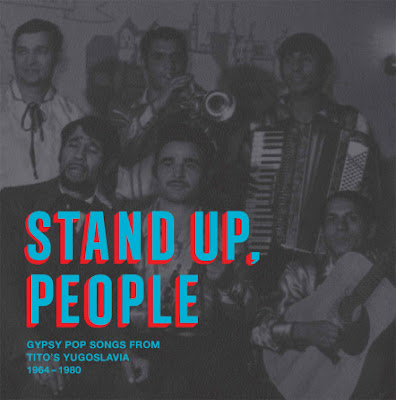 ARTIST: various artists
TITLE: Stand Up, People: Gypsy Pop Songs From Tito’s Yugoslavia 1964-1980
LABEL: Vlax / Asphalt Tango
Interest in popular music from the Balkans and particularly that made by its Roma (gypsy) natives has grown steadily over the last ten years. Likewise the interest in vintage vinyl, with crate-diggers now fanned out across the globe in search of nuggets that most all of us missed the first time out. Now these two trends collide head-on in this release of super-obscure recordings from ex-Yugoslavia; not surprisingly, the result is two great tastes that taste great together. Headline items here include some early sides by the future king and queen of Roma music, Saban Bajramovic (at his Sinatra-like best on track 8) and Esma Redzepova (4 is beautiful: psych-influenced and melismatic). Popular in his home market (Macedonia) but a revelation to me is Muharem Serbezovski – 1 is reminiscent of Turkish folk-rock, 6 demonstrates the powerful pull of Bollywood on Roma music. 10, from Kosovo, is an amazing blend of the tradition with the sounds of spaghetti westerns. And don’t miss 19, a garage rock version of the unofficial Romani national anthem. Brilliant – a truly inspired compilation.
TOP TRACKS:    1    4    6    8    10    19
ALSO RECOMMENDED:    2    7    9    13    14    15    16
Labels: Reviews