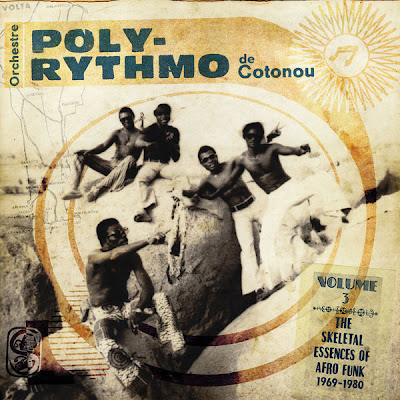 ARTIST: Orchestre Poly-Rythmo De Cotonou
TITLE: Volume 3: The Skeletal Essences Of Afro Funk 1969-1980
LABEL: Analog Africa
This compilation is Analog Africa’s fourth reissue of Poly-Rythmo; their series plus Soundway’s The Kings Of Benin Urban Groove, PAM’s Reminiscin’ In Tempo, and the band’s 2011 comeback album Cotonou Club have firmly established Poly-Rythmo as one of Africa’s all-time greatest bands. With all that material already reissued, it’s remarkable that this latest release measures up to its predecessors. But it does, in spades – start with track 13, based on a modified bossa nova rhythm (!) and easily as outstanding a composition and performance as anything in this band’s catalog. Poly-Rythmo was always among the most versatile of bands, and that’s well reflected here: if you dig Afro-funk try 2, 3 is their version of the Congolese cavacha rhythm (the basis for soukous, ndombolo etc.), 9 is another demonstration of how they lock down the Afro-Cuban sound, and 10 is the kind of track that makes Poly-Rythmo unique, a funky take on a traditional Beninoise voodoo rhythm. Outstanding from beginning to end, and that’s actually a pretty good summary of this band’s entire recorded output as well. Highly recommended.
TOP TRACKS:    2    3    9    10    13
ALSO RECOMMENDED:    4    5    6    7    8    11    14
Labels: Reviews