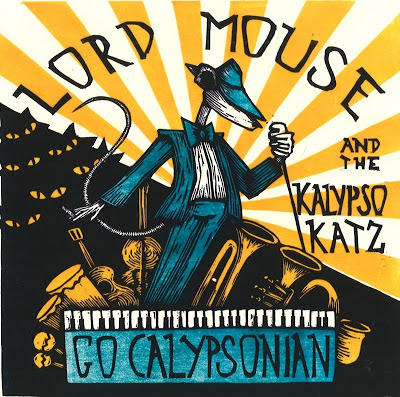 ARTIST: Lord Mouse & The Kalypso Katz
TITLE: Go Calypsonian
LABEL: Piranha
Is calypso revival the new new thing? Well, two points don’t make a trend, but with Kobo Town’s superb new album (released in April) followed by this one, you do have to consider the possibility. The Kalypso Katz are a 17-piece band based in the world’s current number-one multicultural party city, Berlin. Members hail from seven countries; of course, none are actually from calypso’s birthplace, Trinidad. That doesn’t stop them from having a hell of a good time swinging the brassy big-band sound that characterized calypso’s golden age. Another characteristic of the genre is clever wordsmithing – track 4 addresses the obvious “can-white-men-play-the-blues” question, and 5 is a fun addition to the long line of calypso relationship songs. 8, which briefly quotes Harry Belafonte's “Zombie Jamboree,” shows the band at its jazziest, and 7 is a cover of a wonderful song by Bahamian singer Blind Blake (not the American bluesman), who also wrote “Sloop John B.” If you’re not grinning while listening to these guys and gals, better check your pulse.
TOP TRACKS:    4    5    7    8
ALSO RECOMMENDED:    1    2    6    9    11
Labels: Reviews