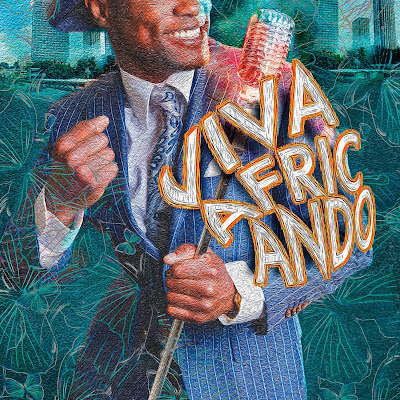 ARTIST: Africando
TITLE: Viva Africando
LABEL: Sterns
If you’re an African of a certain age (about my age, in fact) and you’re a music fan, then you’re probably a salsa fan. Africando has been making best-of-breed salsa Africana for 20 years now; this is their eighth album and it’s more of the same, which is to say a great source of pleasure. The project is masterminded by Ivoirian producer Ibrahim Sylla and Malian arranger Boncana Maiga; for each edition they invite veteran singers from all over Africa (eight countries are represented this time and you’ll hear ten different languages on the album) to team up with the cream of New York City’s Latin session players. Highlights include griot master Sekouba Bambino (track 3), who no doubt sounds good singing the phone book as well; a tribute to one of the band’s original singers, Gnonnas Pedro, that quotes from his biggest hit (5); a quintessential slice of salsa Senegalaise sung by another original member, Medoune Diallo (12); and a charanga-style medley of Santana hits (10) featuring Cape Verde’s Rene Cabral. And for dessert (13), the Spanish Harlem Orchestra offers up its own tribute to Africando. Don’t know about you, but I never get tired of this stuff.
TOP TRACKS:    3    5    10    12    13
ALSO RECOMMENDED:    1    2    4    6    7    8    9    11
Labels: Reviews