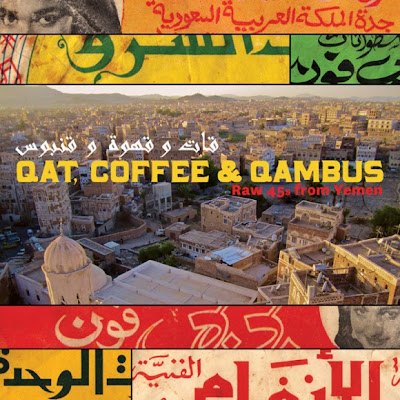 ARTIST: various artists
TITLE: Qat, Coffee & Qambus: Raw 45s From Yemen
LABEL: Dust-To-Digital
You might know that Yemen is the historic home of the Bin-Laden clan, and that it probably leads the world right now in per-capita drone strikes. But do you know anything about the music of the southwestern corner of the Arabian peninsula? Well now you do, courtesy of intrepid record collector Chris Menist and Dust-To-Digital (who released this gem on vinyl in 2012 and are now making it available as a CD). Menist, whose Sound Of Siam and Thai? Dai! compilations put the music of Thailand in a new light, describes Yemeni recorded music as “almost totally impervious to western influence,” and for that reason alone this disc is valuable listening. Start with track 1, a female singer accompanied by nothing but drumming on a copper tray – brilliant, totally unique to my ears, if you dig industrial music or North African trance or Congotronics you’ll get it right away. Track 8 is a wedding song with some fabulous background ululating and whooping, 7 has a funky rhythm that’s perfect for bellydancing, and 2 is a bluesy number with the singer accompanying himself on a twangy qambus (Yemeni lute). Fascinating stuff.
TOP TRACKS:    1     2     7     8
ALSO RECOMMENDED:    3    6    9
Labels: Reviews