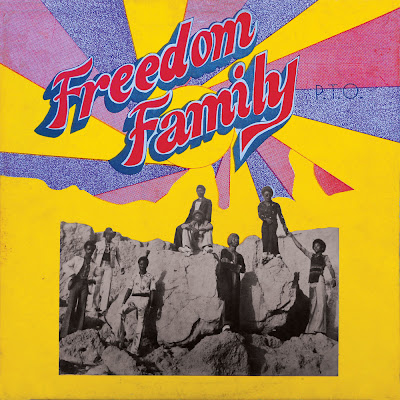 ARTIST: Freedom Family
TITLE: Ayentsoo
LABEL: Academy LPs
Frank Gossner (Voodoo Funk) and Academy LPs have another winner in this choice slab of Ghanaian Afro-funk. The Freedom Family was one of West Africa’s tightest combos, although this is the only LP they ever waxed under that name. As the Plastic Jims (named after the Sly & The Family Stone song) and the Heartbeats ’72, they spent several years backing up Geraldo Pino, West Africa’s first soul star and the man who gave Fela the impetus to invent Afrobeat. They made this record for EMI in Lagos in 1974, and it is first rate from beginning to end. Led by music director Chief Kwame Frimpong’s keyboards, the band featured a tasty two-man horn section, a killer rhythm section and charismatic lead singer Albert Jones. Every track here is excellent, but take particular note of 3 (an instrumental) and 7 (a vocal) – they’re loaded with tuneful hooks like the best of Booker T & the MGs. And for a change of pace try 6, which sounds like James Carr in Nigeria. Jones also contributes the lengthy liner notes chronicling the band’s ups and downs on stage, in business and in their colorful personal lives – it’s the rock ‘n’ roll lifestyle, West African version. Seminal if you dig Afro-funk.
TOP TRACKS:    1    3    6    7    9
ALSO RECOMMENDED:    2    4    5    8
Labels: Reviews