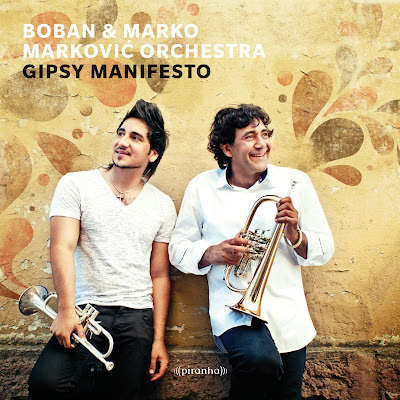 ARTIST: Boban & Marko Markovic Orchestra
TITLE: Gipsy Manifesto
LABEL: Piranha
The orchestra of Serbia’s Boban Markovic is one of the bands that put the exhilarating, improvisational, funky sound of Balkan brass on the world’s musical map. And much of the popularity of Balkan brass comes from the DJs and remixers who add four-on-the-floor dance beats and mash it up with every sound under the sun – especially in Europe, nothing gets the dance floor percolating better than “Balkan beats.” Now Boban’s son Marko (who has fronted the band and played lead trumpet since 2006) is taking the semi-radical step of thoroughly integrating Balkan beats into the band’s sound. Purists might look askance at this calculating move, but no one ever accused me of being a purist: I think it sounds great. They haven’t exactly abandoned their classic sound: track 12 is a deep a Roma sound as they’ve ever waxed, and 10 shows off the band’s agility and chops. But those kids today wanna dance, and they’re definitely going to boogie down to 1 (an Esma Redzepova megahit), 2 (a tongue-in-cheek nod to trashy, popular turbo-folk), 4 (right out of Shantel’s playbook) and the breakneck-paced 8. Not yer father’s Balkan brass – more like Balkan beats on steroids.
TOP TRACKS:     1    2    4    8    10    12
ALSO RECOMMENDED:    3    5    6    7    9    11    13    14    15    16
Labels: Reviews