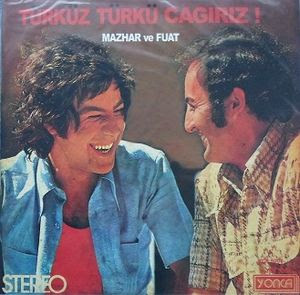 ARTIST: Mazhar Ve Fuat
TITLE: Turkuz Turku Cagiririz!
LABEL: Shadoks Music
The continuing crate-dive into all things Turkish from the 1960s and 1970s has surfaced this folk-rock gem. Mazhar Alanson and Aziz Fuat Guner got together over a shared interest in the Beatles’ Rubber Soul; after working with Baris Manco they went out on their own (they would later add Ozcan Ugur to the group and rename themselves MFO; that combo is one of Turkey’s most enduring) and recorded their only duo album in 1973. By that point the Laurel Canyon sound and especially Crosby, Stills, Nash & Young had become a big influence on Mazhar & Fuat – check out 10, the only English-language song here. They were also clearly listening to British folk-rock bands like Fairport Convention, as you can tell from the introduction to 4. The influence is in the reverse direction on 5, whose introduction, verses and guitar bridge are so similar to Richard & Linda Thompson’s “Did She Jump Or Was She Pushed?” that it couldn't be a coincidence. There are two true classics here: 7 has an unbelievably gorgeous psych-folk melody, and the title track (1) is a fine a slice of Turkish folk-rock as anything Baris Manco or Erkin Koray ever recorded. Easily one of my favorite Turkish reissues of the current wave.
TOP TRACKS:    1    4    5    7
ALSO RECOMMENDED:    2    6    8    10    11
Labels: Reviews