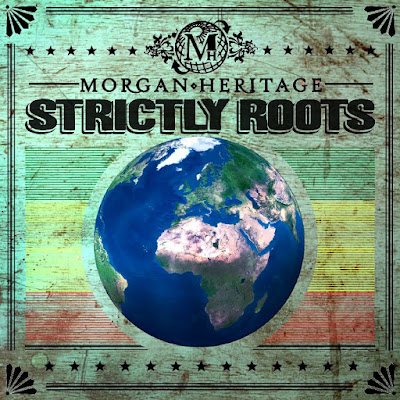 ARTIST: Morgan Heritage
TITLE: Strictly Roots
LABEL: CTBC
This is the tenth studio album from Morgan Heritage, a band formed in 1994 by eight children (now down to five) of reggae and soul legend Denroy Morgan. They’re one of the most popular touring acts in reggae worldwide; their records are reliably rootsy, melodic and free of gimmicks and flavors-of-the-month. This album is no exception – it’s a solid excursion in 21st century roots reggae with more than a little dancehall leavening. The title track (1) proclaims and exemplifies the band’s esthetic philosophy: strictly roots. 2 features one of those soaring melodies typical of Morgan Heritage’s sound and a nice guest star turn by Chronixx, one of Jamaica’s young roots revival singers. 8 is reminiscent of early dancehall: a clearly roots riddim with lead singer Peetah Morgan doing more toasting than singing over the top of it. And 9 has a later dancehall feel, with a bass line more explicitly borrowed from funk, contributed by Bobby Lee of the enormously successful Northern Virginia reggae band SOJA. Nothing groundbreaking here, just solid roots reggae that’s as good as any that will be made in 2015.
TOP TRACKS:    1    2    8    9
ALSO RECOMMENDED:    4    5    7
Labels: Reviews