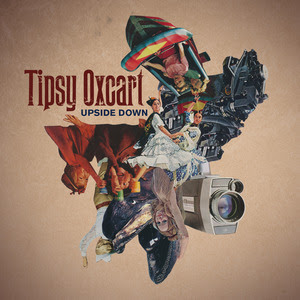 ARTIST: Tipsy Oxcart
TITLE: Upside Down
LABEL: self-released
Tipsy Oxcart is a talented quintet from New York specializing in Balkan instrumental music; this is their second album. With its dramatic tempos, counter-intuitive harmonies and odd time signatures, Balkan music can be very demanding on the players. Tipsy Oxcart breezes through their repertoire (primarily original compositions) like it’s second nature – these folks can play. Ayal Tsubery’s bass guitar keeps it fundamental and funky, leaving room for drummer Dani Danor to fill in the rhythmic complexity. On the front line, accordionist Jeremy Bloom, reed player Connell Thompson and violinist Maya Shanker trade the melody lines back and forth like a Dixieland band. All the soloing is excellent, and Shanker really stands out – her playing doesn’t blaze like some of the fleet-fingered Roma fiddlers, it smokes like soulful jazz players Billy Bang or Regina Carter. Track 3 is a tour de force, in some ungodly, unidentifiable (by me) time signature that everyone manages to lock into. 1 is a funky excursion inspired by a Kanye West track, 2 is one of those speedy Balkan numbers on which the band sounds oddly relaxed, and 5 follows an elegant dramatic arc to an ecstatic ending. Good stuff.
TOP TRACKS:     1    2    3    5
ALSO RECOMMENDED:    4    6    7    8    9    10    11
Labels: Reviews