The Frightnrs | Nothing More To Say 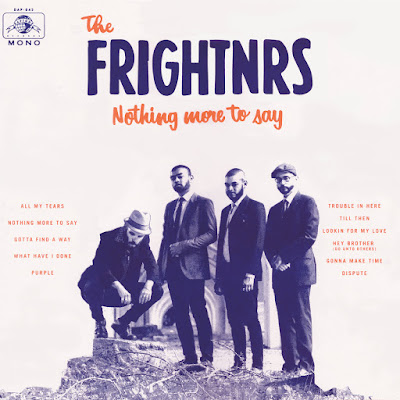 ARTIST: The Frightnrs
TITLE: Nothing More To Say
LABEL: Daptone
This is the debut long-player by the Frightnrs, a young band from Queens, New York that specializes in original music based on rocksteady, the mid-60s Jamaican genre that preceded reggae. That’s a bit too narrow of a description – in their deeply considered sound and in the marvelous production by Victor Axelrod at Daptone House of Soul you’ll hear elements of pleading Southern soul men, doo wop, lovers rock and classic reggae harmony trios. These are all vocalist-oriented genres, and in Dan Klein the Frightnrs had a remarkable lead singer and songwriter whose high tenor calls up memories of legendary soul men and rude boys. I use the past tense because Klein was diagnosed with ALS (Lou Gehrig’s disease) while the album was in production and died in June at age 33. The tragic backstory threatens to overshadow the music, which would only compound the misfortune – this is one of the best albums I’ve heard all year, one that’s likely to be considered a classic of its type in 20 years’ time. I’ve selected my five favorite songs, but you could easily play any of the eleven on the radio. Or better yet, listen to it straight through then play it again.
TOP TRACKS:    1    4    5    6    9
ALSO RECOMMENDED:    2    3    7    8    10    11
Labels: Reviews