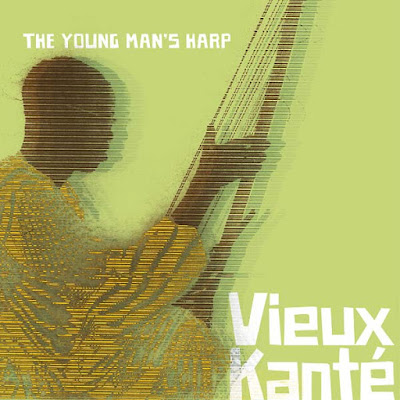 ARTIST: Vieux Kante
TITLE: The Young Man’s Harp
LABEL: Sterns Africa
The kamale ngoni, or young man’s harp, is a young instrument: a smaller, secular version of the donso ngoni (hunter’s harp), it wasn’t invented until the 1960s and it quickly became a staple in the Wassoulou music of southwestern Mali. In his brief life (he died at 31 in 2005, just a few months after making this recording), Vieux Kante revolutionized his instrument: he doubled the number of string to 12 which enabled him to play scales beyond the traditional pentatonic modes, he developed extended glissandi (note bending and sliding) techniques, and he perfected an amazing range of harmonics simulating bells and animal sounds. Calling a musician “the Jimi Hendrix of X” is a cliché, but Vieux Kante truly is the Jimi Hendrix of the kamale ngoni. After he died no one bothered to release these recordings (there are some jaw-dropping YouTube videos of Kante however). But now we have them, and they are splendid. The top tracks are the ones on which Kante digs into his instrument (although he’s a perfectly fine singer) and leaves the vocals to Kabadjan Diakite. Best of all is the voiceless track 1, the ultimate showcase for Kante’s mind-blowing technique.
TOP TRACKS:    1    3    5    7
ALSO RECOMMENDED:    2    4    6
Labels: Reviews