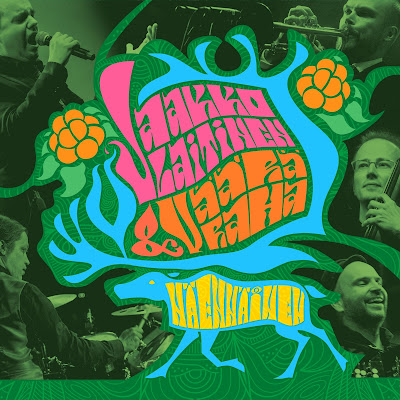 ARTIST: Jaakko Laitinen & Vaara Raha
TITLE: Naennainen
LABEL: Playground Music
OK, a band from Finland with a Balkan sound? I’m game, expecting it’s going to be a tongue-in-cheek Leningrad Cowboys scenario. Wait a minute: these guys are totally serious. They’re Laplanders now based in Helsinki, frequently described as Finland’s wildest live act, on their fourth album, write most of their material themselves, and apparently wowed the world music cognoscenti at a WOMEX showcase in 2015. And they can really play Balkan music – start with track 1 which has the reckless abandon often attributed to the Roma and rarely to the Finns. Laitinen has a swanky, syrupy voice that reminds me of the connection between gypsy stars like Saban Bajramovic and American crooners like Sinatra and Nat King Cole. His band, with accordion and trumpet out front and some tasty guest clarinet and violin playing, handles the twists and turns of Balkan music like a well-tuned race car. Track 10 is another exhilarating high-speed race, but these guys are even better on their mid-tempo Turkish influenced material like 2 and 7. And 5 is a theatrical klezmer-flavored tour de force. This would be an excellent album even if they were from Romania.
TOP TRACKS:    1    2    5    7    10
ALSO RECOMMENDED:    3    4    6    8    9    12
Labels: Reviews