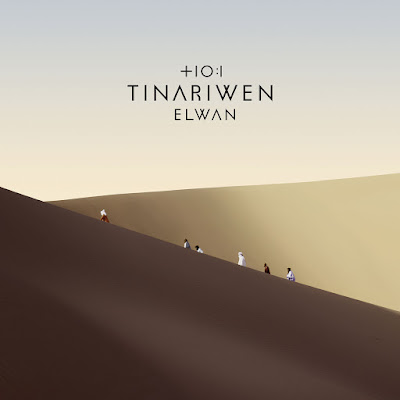 ARTIST: Tinariwen
TITLE: Elwan
LABEL: Anti-
This is the band that invented the sound: whatever you want to call it, assouf or tishumaren or la guitare or desert blues, Tinariwen created it in 1979 in southern Algeria’s Tamanrasset oasis. It’s the modern sound of the Sahara Desert – pentatonic drones played on stinging electric guitars over the rolling polyrhythms of handclaps and tinde drums. Almost 40 years on, Tinariwen is now a multi-generational band and still the kings at what they do, although there’s plenty of competition nowadays. Tinariwen’s seventh album is one of the most satisfying in their catalog – their searing electric side is captured in all its rock ‘n’ roll glory on tracks 1, 2 and 9; their darker, bluesier, more contemplative side shows best on 3, 8 and 11. All these tracks compare favorably to the top moments of their previous albums. This supremely self-contained band needs guest stars like Trump needs a second Twitter account; nonetheless, this time guitarists Kurt Vile, Alain Johannes and Matt Sweeney sit in, and Mark Lanegan adds an atmospheric English-language vocal on 11. The original is still the best, don’t settle for less.
TOP TRACKS:    1    2    3    8    9    11
ALSO RECOMMENDED:    4    5    6    7    10    13
Labels: Reviews