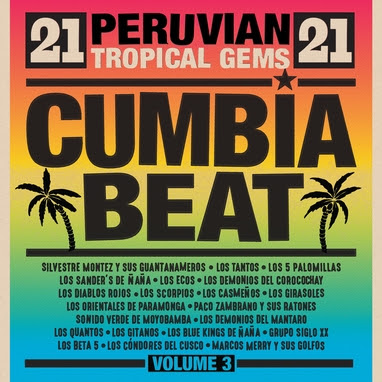 ARTIST: various artists
TITLE: Cumbia Beat, Vol. 3
LABEL: Vampisoul
The uniquely Peruvian version of cumbia called chicha is now 50 years old. Vampisoul has been documenting the genre since 2010 with its Cumbia Beat series; Volume 3 suggests that there’s plenty more to be anthologized. This edition is heavier on the pre-chicha style called huaycumbia: tracks 6,9 and 10 are examples. And like the previous editions, the emphasis is definitely on bands from or based in and around Lima and coastal Peru, rather than those straight out of the selva (Peru’s tropical rain forest, the culture of which is a critical influence on chicha’s development). Two of the highlights here are 5 and 21, which definitely have the selva sound of Juaneco Y Su Combo or Los Wembler’s; 5 even has the breathy female background vocals of Juaneco’s “Vacilando Con Ayahuasca.” 20 is a twangy delight – fans of classic American country really ought to check out chicha. And 15 and 19 are straight-forward and hard-hitting, chicha at its most elemental. There’s now more than half a dozen worthwhile chicha compilations, plus reissues of classics by Los Destellos, Juaneco and many lesser known groups. Keep ‘em coming, please.
TOP TRACKS:    2    15    19    20    21
ALSO RECOMMENDED:    many of the rest of them
Labels: Reviews