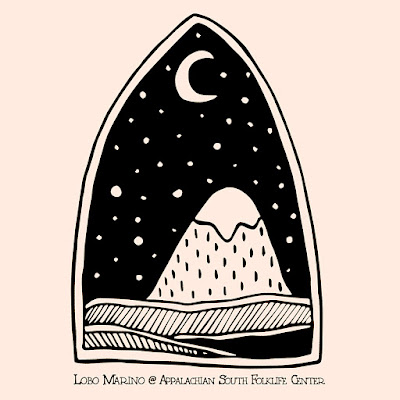 ARTIST: Lobo Marino
TITLE: At Appalachian South Folklife Center
LABEL: self-released
Lobo Marino, the Richmond-based duo of Laney Sullivan and Jameson Price, has been making music for ten years. They tour and gig continuously, and they’re released eight recordings over that period. But until now, none of those sets has captured the raw power and otherworldly beauty of their live performances – this one does so in spades. Drone instruments are a key element of the Lobo Marino sound: Sullivan’s harmonium anchors the bottom of all six songs, Price is on mouth harp on track 1, and both play 5-string banjo (I think it’s Price on track 5) which has a whole string just dedicated to drone. Also central for them is devotional music: qawwali (South Asian Sufi devotional music) and kirtan (also from South Asia and now an important part of many yoga practices) are key reference points, as are American Southern gospel hymns (the medleys on 1 and 5 each include a hymn). Sullivan’s voice has become an extraordinary instrument in its own right – check out her wordless vocalizing on 3. Their unlikely set of influences has come together in a unique style that’s as natural as it is unexpected. A superb album showing this band at its finest.
TOP TRACKS:    1    2    3    4    5    6
ALSO RECOMMENDED:    that’s all of them, folks
Labels: Reviews