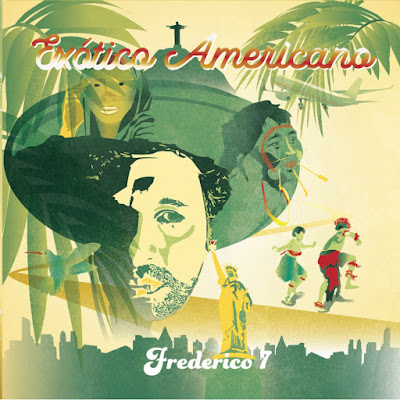 ARTIST: Frederico7
TITLE: Exotico Americano
LABEL: self-released
Frederico7 (Frederico Geib to his friends and family) is a Brazilian-born musician now based in Austin TX. In that musical hotbed, he’s fronted three cool bands (Os Alquimistas, Suns Of Orpheus and Macaxeira Funk); now he’s out with his first solo album and it’s a winner. Frederico comes right out of the chute with the title track, an homage to the American melting pot that musically would be right at home on Jorge Ben’s classic Africa Brasil album. Ben is obviously a big influence – 4 is samba soul but more akin to modern updaters like Seu Jorge and Marcio Local than to Ben’s 70s sound. 5 is a cumbia-reggae mashup that could be a downtempo track on the latest Systema Solar or Bomba Estereo release. 6 is a trippy, tuneful take on the classic samba parade sound with some deep, heavy lyrics in English (he also writes and sings in Portuguese and Spanish). And 8 is Brazilian psych-pop very much in the manner of the tropicalia movement, complete with flute solo. Top-shelf MPB from Austin? Why not? They have everything else there, musically speaking. An impressive debut from an artist who’s clearly just been waiting for his moment to shine.
TOP TRACKS:    1    4    5    6    8
ALSO RECOMMENDED:    2    3    7    9    10    11
Labels: Reviews