Dawda Jobarteh | I Met Her By The River 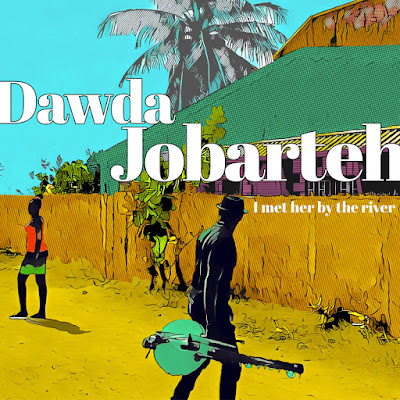 ARTIST: Dawda Jobarteh
TITLE: I Met Her By The River
LABEL: Sterns
Here’s the third album from Gambian kora player Dawda Jobarteh, who now lives in Denmark. Jobarteh’s first two have been band albums, with plenty of solo space for colleagues like guitarist Preben Carlsen. This one is more of a solo album – Carlsen is on bass, three percussionists also contribute, and Souleymane Faye of the Senegalese band Xalam adds a compelling vocal on track 2, one of the album’s highlights. The first two albums were significantly influenced by jazz (both American and Nordic), so it’s not a surprise to see a cover of Mongo Santamaria’s “Afro Blue” (8), made famous by John Coltrane. What is a surprise is Jobarteh taking it on with electric kora, an instrument I don’t think we’ve heard him play before. It’s an incendiary version, with the trio setting giving Jobarteh ample elbow room. Even more surprising is an unaccompanied cover of Adele’s chart-topper “Hello” (9) – it does have a beautiful melody, not unlike the Mande classics that Jobarteh cut his teeth on. 4 is an original very much in the latter tradition, truly not that far a piece from 9. Another strong album from this free-thinking musician.
TOP TRACKS:    2    4    8    9
ALSO RECOMMENDED:    1    3    5    6    7
Labels: Reviews