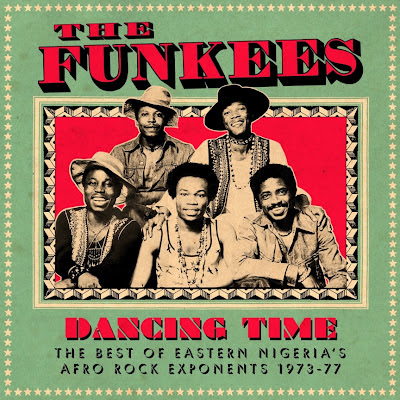 TITLE:  Dancing Time: The Best Of Eastern Nigeria’s Afro Rock Exponents 1973-77
LABEL:  Soundway
The Funkees have been featured on three of Soundway’s Nigeria Special compilations; now that label presents a full-length retrospective of this fine band. Hailing from Aba in east Nigeria, the band’s future members fought on Biafra’s side in the Nigerian Civil War and were sponsored by the army after the war.  They developed a hard-hitting Afro-rock sound, heavily influenced by American and British bands, and similar to that of Lagos-based bands like MonoMono and BLO.  The band cut a series of singles, then relocated to London in 1973 where they released two albums and a few 45s before disbanding in 1977.  This album collects all of the Nigerian singles including their most famous song (track 10), a superb War cover (9), and a groovy jam (7) that sounds like a perfect B-side.  From the albums, you get heavy Santana-influenced rock (4) and equally heavy social commentary (14) along with other goodness.  This is a really well-curated compilation of a band that deserves the wider recognition it’s received in the last few years.