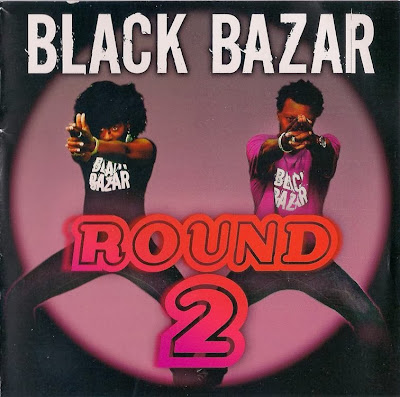 ARTIST: Black Bazar
TITLE: Round 2
LABEL: Lusafrica
“Black Bazar” is a concept as well as the name of a band of contemporary Congolese musicians.  Like the concept, the band membership is not static.  It changes to illustrate an idea. The goal is to present great modern Congolese music that reflects the influences of the day. In the original Black Bazar, that day was back in the 1950s when Congolese musicians such as Joseph Kabaselle (aka Le Grand Kalle) and African Jazz coined the term ambiance to describe the music they were creating, a musical style that reclaimed Cuban rumba and melded it with its roots in central Africa. In Round 2, the day is TODAY. Here we have influences of contemporary Congolese musicians such as Werrason, Koffi Olomide and Bill Clinton as well as Francophone Caribbean bands, so popular now in most of Africa, but the music is given new life and refreshment. It is a clean, clear version of contemporary Congolese music, stripped of the unnecessary baggage of superstar egos and mabanga (the often tedious and annoying addition of the naming of sponsors, added just prior to an album’s release and recorded over songs). They’ve done a great job. Every song illustrates the point and almost every song is a killer. The disc starts and ends in dance mode with a very contemporary sebene-led song featuring the legendary Beniko “Zero Faute” Popolipo on guitar. The second song, MYSTIC BAZAR, captures the wildly popular neo-folkloric stylizations of animateur Bill Clinton. There are a few songs on the disc that are just plain superb modern rumba Congolaise. The songs BEAU GOSSE, UN PEU DE TOI, BLACK MANI (another Congolese remake of Trio Matamoros’ "El Manicero") and LES JALOUX VONT MALGRIR are highlights of the album. Another really great song features Fanfan of Haiti’s Tabou Combo and it’s a great track that seamlessly joins Haitian compa with Congolese rumba.
TOP TRACKS:    1    2    3    6    8    10    12
ALSO RECOMMENDED:    4    7    11
REVIEWER: David Noyes
Labels: Reviews