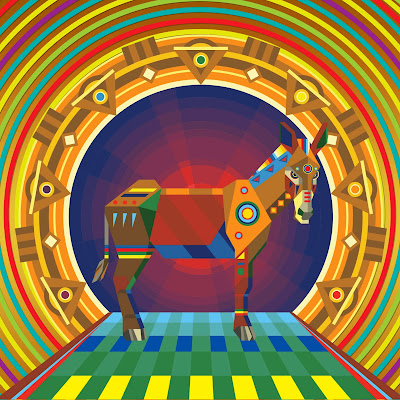 ARTIST: Systema Solar
TITLE: La Revancha Del Burro
LABEL: Sambumbia
Systema Solar is a multimedia (film, performance and costume along with music) septet that gives Colombian roots music a neo-psychedelic injection and a hip hop/electronica pants-kick. This is their second album, and it’s quite remarkable: they fully integrate a wide variety of vintage Colombian styles like gaita, champeta, the deep Afro-Colombian sounds of San Basilio De Palenque, and even salsa with the 21st century’s international dance-floor language. These aren’t remixes or mashups; they’re unique and original performances that straddle the two worlds in ingenious and compelling ways. For example, track 1 grafts the traditional cane-flute onto a boom-bap rhythm, resulting in a dance-floor filler of the first order. Salsa, Colombia’s most popular musical export today, gets the Systema treatment on 4. 12 is an exhilarating Afro-Colombian call-and-response vocal that sounds natural nestled next to rapping and turntablism. And my favorite track is 9, based on champeta and its electronica cousin terapia, deeply syncretic styles to begin with, here receiving a host of 2013 flourishes. This is one of the most fiercely original bands in the world right now.
TOP TRACKS:    1    2    4    9    12
ALSO RECOMMENDED:    3    5    6    7    10    11
Labels: Reviews