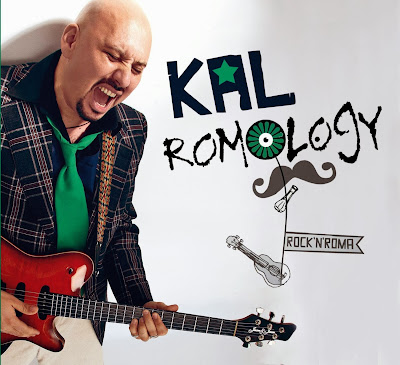 ARTIST: Kal
TITLE: Romology
LABEL: ARC
The third album from the Belgrade-based combo Kal (“black” in Romani, a word often used by Europeans to describe the Roma, Europe’s fastest-growing ethnic group) continues and expands their “rock ‘n’ Roma” sound. Frontman Dragi Ristic is on the front lines of the Roma awareness movement – he hosts a Roma music, dance and language summer school every year, and the band has worked with organizations like Amnesty International and the Open Society Institute. Musically, Kal doesn’t fit into the most obvious Balkan-Roma categories – they’re definitely not folk, nor a brass band, nor remixed “Balkan beats.” At their heart they’re a gritty yet theatrical rock band based on Roma elements; if that sounds similar to Gogol Bordello or the No Smoking Orchestra, you’re on the right track. And they’re in a similar league with those two bands in the way they serve up their political message with an entertaining spoonful of sugar. There’s fifteen short, sweet songs here and essentially no filler – it’s an album that’s strong from start to finish. Kal describe themselves as “the voice of a new Romani generation” – let’s hope that’s the case.
TOP TRACKS:    1    2    5    7    9    15
ALSO RECOMMENDED:    3    4    6    10    11    12    14
Labels: Reviews