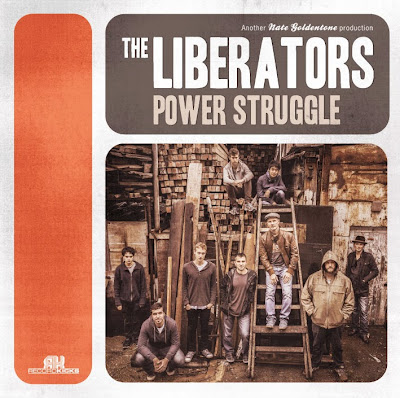 ARTIST: The Liberators
TITLE: Power Struggle
LABEL: Record Kicks
Afrobeat is popular all over the world these days, and Australia is no exception: in the last few years, we’ve heard a bunch of fine Aussie Afrobeat combos: the Shaolin Afronauts, Public Opinion Afro Orchestra and the Afrobiotics. Add The Liberators to that list. This is the second album for the Sydney-based 10-piece band, and it’s smoking. The Liberators share a number of members with world-class funk band Dojo Cuts, and Dojo lead singer Roxie Ray provides the only vocal here on track 9. Other than that, it’s an all-instrumental session with short songs by Afrobeat standards (none longer than 6:05), many featuring sour, pentatonic, almost Ethiopian melodies. In these three aspects, The Liberators sound quite a bit like the Budos Band. Another major influence is Antibalas: you can hear them in Colin Ho’s Ticklah-like trippy organ swirls and stabs (check out the beginnings of tracks 1 and 5) and see them in the explicitly political song titles. Antibalas’ Martin Perna and Amayo are big fans, and with good reason: this is top-shelf 21st century Afrobeat, definitely worth your time.
TOP TRACKS:    1    4    5    6
ALSO RECOMMENDED:    2    3    7    8    9
Labels: Reviews